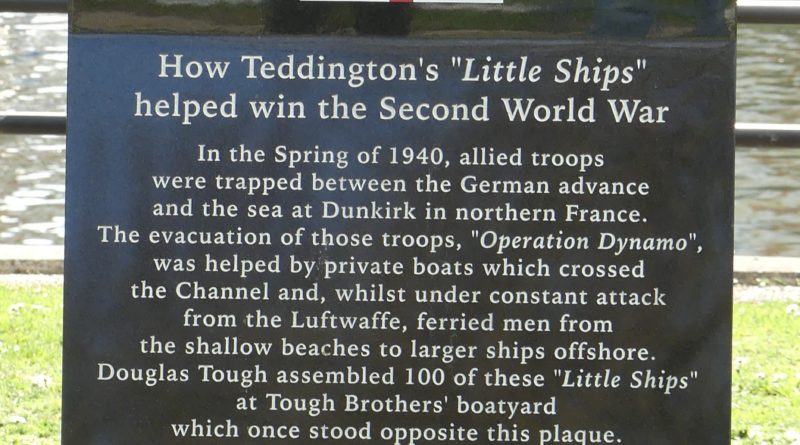 The newer memorial, unveiled in 2010, is placed in the grass, overlooking the site of Tough Brothers’ Boatyard which was on the other side of the Thames.

The memorial is inscribed with the words:

In the Spring of 1940, allied troops were trapped between the German advance and the sea at Dunkirk in northern France. The evacuation of those troops, “Operation Dynamo”, was helped by private boats which crossed the Channel and, whilst under constant attack from the Luftwaffe, ferried men from the shallow beaches to larger ships offshore.

Douglas Tough assembled 100 of these “Little Ships” at Tough Brothers’ boatyard which once stood opposite this plaque. During the 10-day operation they helped in the rescue of 338,226 British and French troops who were saved to fight another day.

Wartime leader Winston Churchill called this “A miracle of deliverance”.

The original plaque on the end of the Lock buildings reads:

During World War II (1939-1945) The Boatyard of Tough Brothers was at the wharf on the opposite side of the river.

In May 1940 Douglas Tough organised and assembled 100 private boats at that location.

In ‘Operation Dynamo’ these ‘Little Ships’ went to the beaches of Dunkirk with many other vessels and rescued 338,226 British and French troops between 26th May and 5th June 1940.

This operation saved our country, enabling us to go on to victory in 1945.